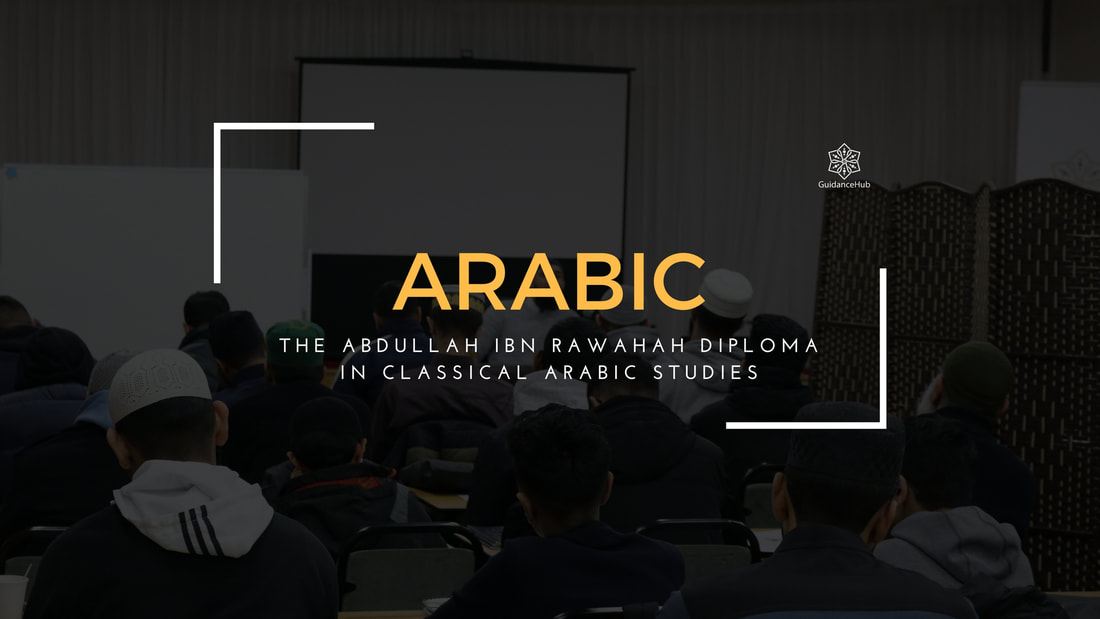 Why study with us?

The Purpose of the Diploma

1) To equip the learner with the language skills needed to study classical Islamic texts and thereby gain access to the rich heritage of traditional Islamic scholarship.

2) To equip Muslims who wish to study the classical Islamic sciences abroad or domestically with the language skills they need to accomplish this task.

The Methodology Adopted in the Delivery of the Diploma

Qur'anic/Classical Arabic is the Arabic used in the Noble Qur'an; the Arabic of classical religious, intellectual and legal texts; and upon which Modern Standard Arabic is based.

The focus will be on practical application of grammatical  rules by directly reading  and translating classical Arabic texts, including Qur’anic passages. Students will consequently be able to see the fruits of their efforts very quickly after embarking upon their studies.

In the first year, 15 phrases/sentences from the Qur'an will be studied per unit accross 40 units. A minimum of 600 Qur'anic phrases will therefore be learnt by the student.

Vocabulary lists are based on word frequency in the Qur’an and by the end of Year One the student will be exposed to approximately 50% of Qur’anic vocabulary.

The ethos of this diploma is inspired by the legacy of the legendary poet, military general,  and companion of the Messenger of Allāh ﷺ: Abdullāh Ibn Rawāha.  Abdullāh was one of the twelve leaders selected by the Prophet ﷺ in the pledge of Al-Aqabah to manage the affairs of the new Muslim community in Madina. He participated in all the major battles fought by the Muslims, including the battles of Badr, Uhud and Al-Khandaq. He was one of the few individuals in the city of Madina who could write proficiently, and was an accomplished poet. He was therefore appointed as one of the poets responsible for defending the honour of the Prophet ﷺ, alongside Hassān Ibn Thābit and Ka’b Ibn Mālik. His legacy was sealed in the battle of Mu’tah, in which a small army of approximately 3,000 Muslims was dispatched by the Prophet ﷺ to face a Roman Army of almost 200,000 soldiers. Abdullāh was instructed by the Prophet ﷺ to take control of the army should Zayd ibn Hārithah and Ja’far Ibn Abī Tālib be killed. Soon after the battle began, both Zayd and Ja’far were felled by the onrush of Roman swords. The battle-flag was therefore hastily passed onto Abdullāh, who hesitated for a moment before reciting the following lines of poetry:

After reciting these lines, he thrust himself into the ranks of the Roman army and fought valiantly until he was martyred.
​Prerequisites:

- The ability to read the Qur’an (without understanding its meanings).

NB: Reading the Arabic script will not be taught as part of this programme.

Certification:
Upon completion of this diploma, students will receive the Abdullāh Ibn Rawāha Certificate in Classical Arabic Studies, which will be signed by the teachers.
Arabic Year 1
'Access to Quranic Arabic' by Abdul Wahid Hamid

This textbook gives the student a solid foundational understanding of Arabic Grammar. One of its special features is that all the words, phrases, and sentence structures used in the textbook are from taken from the Qur’an. The textbook thus has the additional benefit of exposing students to the language of the Qur’an from the very beginning of their Arabic studies.

The textbook is also based on the principle of word frequency in the Qur’an. It uses three vocabulary lists – with words occurring over 100 times, between 50 and 100 times and between 25 and 49 times in the Qur’an. This approach has two benefits.

1) Students will not be burdened with a very large vocabulary from the outset, and with non-Qur’anic vocabulary.
2) By mastering the select vocabulary, they will be able to understand a substantial amount of Quran'ic vocabulary in application.

This concise text, popularly known by its short name Al-Ajurrumiyya, was compiled by the Moroccan scholar, Ibn Ajurrum (d. 723AH). It is one of the most celebrated primers of classical Arabic grammar and gives students a firm grasp of the most important grammatical principles and rules in the Arabic language.

Amongst the topics students will learn when studying this work are:

• How words are classified in the Arabic language
• How to identify different types of words
• The names, functions and signs of grammatical cases
• The major elements of an Arabic sentence
• The nature and role of prepositions and conjunctions

This scucint text, popularly known by its short name, Matn Al-Izzi, was compiled by the Persian scholar, Izz Al-Din Al-Zanjani (d. 655AH). It is one of the most illustrious primers of classical Arabic morphology and gives students a firm grasp of the most important morphological principles and rules in the Arabic language.

Amongst the discussions students will cover in this work are:

This collection of 42 Prophetic Sayings was compiled by one of Islam’s most renowned masters of hadith, the saintly Syrian scholar, Imam Yahya Ibn Sharaf Al-Nawawi. Al-Arba’een Al-Nawawiya  is one of the first books of hadith a student of sacred knowledge traditionally studied in the past, and was frequently memorised by children after they completed the memorisation of the Qur’an. Its popularity lies in the fact that its collection of prophetic sayings were carefully selected to encapsulate the most fundamental precepts of the Islamic faith.

This intermediate-level work was compiled by the Morrocan scholar, popularly known as Al-Hattab (d. 902AH). The work builds upon the
Al-Ajurrumiyya and prepares the student for the study of more advanced works such as Sharh Qatr Al-Nada by Ibn Hishām Al-Ansāri and Sharh
Al-Alfiyya by Ibn Aqeel. It is for this reason that the author chose to name the work Mutamimma Al-Ajurumiyya which means “The Supplement to Al-Ajurrumiyya”.

The author states in the introduction of the work: “This is a primer in the science of classical Arabic, which seeks to supplement and complete the topics covered in the Ajurrumiyya, such that it serves as a bridge between the Ajurrumiyya and the more advanced works of Arabic grammar.”

This book represents one of the most distinguished works of Arabic morphology in the modern era. It was compiled by the Azhari scholar, Ahmad Al-Hamlawi (d. 1928 AD). The work builds upon foundational works such as Matn Al-Izzi by offering students a succinct yet detailed study of Arabic morphology, covering all the major topics in this science.